Nguyen Thi Thuy Quynh, a student from Le Hong Phong High School, will travel to the United States to study in August.

Nguyen Thi Thuy Quynh, Le Hong Phong specialized high school, Nam Dinh is one of nearly 1,000 elite union members selected to attend the XI National Union Congress, the term 2017-2022 will be on the way. US study in 8/2018 to.

Currently, Thuy Quynh is a member of the 12A2 Union Executive Committee and Head of Study Club.

For nearly 12 years, Quynh has always been a good student, and in 2016, she was awarded the second prize in the national science and technology creation competition in the field of environment with research topic on making titanium oxide doped with nitrogen and tantan to reduce carbon dioxide to metal fuel gas.

The first impression that anyone when meeting Quynh commented that: smart, agile and speak sharp.

Sharing learning achievement, Quynh said: “At school, I learn all subjects. Particularly English subjects spend more time learning. Apart from studying, I also participate in extracurricular activities to improve my communication skills. In English, he usually reads the material and downloads the IELTS and SAT preparation books online. I have more school but not much, mainly self-study.

Quynh advised, if you have the intention to study abroad should invest a lot of time to learn foreign languages. When I have a little English, the scholarship is not difficult.

“You have to determine what industry you study and find a course that suits your ability. For example, compared to the people in Hanoi and Ho Chi Minh City, their academic achievement is not equal, so only apply to schools in the top 70 – 80 “- Quynh said.

As an active delegation of students, as well as the head of Study Club of Le Hong Phong High School – a famous school of Nam Dinh province, Quynh has inspired and creative in learning for the delegation. By exemplary study and aggressive participation in school activities. In addition, the club also organizes exchanges among members of the club with former students and former students of the school and have studied abroad successfully.

Quynh connects his brothers and sisters with students in school to inspire and motivate you on the way to study. In addition, we organize seminars to help you learn more about studying abroad as well as sharing the prevention and avoidance of brain drain by organizing traditional cultural activities. of the country.

During the last national delegation, Quynh was most impressed by the deep speech and enthusiasm of General Secretary Nguyen Phu Trong, especially the talk about the spirit of youth.

According to Quynh, bravery is very necessary for each member in particular and students in general. We have the bravery we can accomplish the aspirations in life, become good members contribute to the development of the country.

Quynh’s dream after graduation is to establish a private brand in the field of marketing. 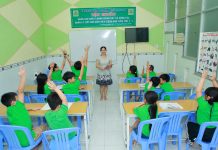 Unique teaching methods; Practitioners are trained in the field and foreign teachers

Quality curriculum; Examination and certification after each course

Learners are trained in all skills through extra-curricular activities

Coordinated with parents to get the best results